Learn About DCC Systems And Decoding the Decoder Space 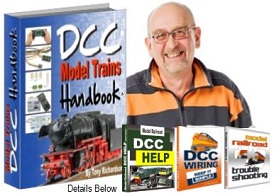 Which is the best DCC system?

Once you have made the decision to use DCC on your layout and carefully selected your command station vendor, you aren’t quite through with the selection process. Now it becomes time to decide just what functions you want to control with your new system. One of the best benefits of DCC control is that you can select from a myriad of decoder hardware to suit your needs without regard to manufacturer.

Why have NMRA standards?

NMRA standards have provided the path for virtually any decoder to work with any other compatible command station. Some manufacturers do provide additional capability unique to their command station/decoder product lines, but for most of the commonly used functions, all decoders are compatible with all command stations that are NMRA compliant.

Is This DCC Decoder Moving, or Is It Just ME?

Decoders are the brains of your DCC system. They interpret the commands that are placed on the rails and perform some action such as turning on lights or setting the locomotive speed or direction. They break down into two general types, mobile and fixed, or accessory, decoders.

Mobile decoders also can be broken out into three sub-categories, function, sound, and combination function/sound. They all share the common use of being installed in rolling stock of some type. 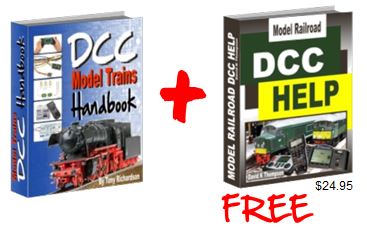 How do DCC Functions operate?

A function decoder will respond to commands to switch on or vary a voltage. Very simple (cheap!) and older decoders may have as few as two functions and are typically employed to vary the locomotive speed and direction. More sophisticated decoders can have four or more functions which allow customized control of lighting or other electronic controls for rolling stock. A typical four function controller can also provide special locomotive lighting effects such as a Gyro-light headlamp by programming. Mobile decoders with more functions can add cab strobes or flashing ditch lights as well as controlling internal passenger car lighting or caboose and locomotive obstruction lights, firebox effects and interior illumination.

Get these two useful e-books and also watch the DCC video here.

How does DCC Sound work?

Prototype trains are large, noisy pieces of machinery. As modelers, we strive for accuracy and authenticity on our layouts, and one of the best ways to do this is to add sound simulations to rolling stock – especially locomotives. Crude steam whistle effects have been around almost as long as electric trains have existed, but the advent of DCC and mobile sound decoders have really given us a new dimension to our operations. DCC sound decoders are available for virtually any size locomotive that is large enough to provide a sound resonating space inside the loco or tender body. Sound quality can be excellent and depends on both the bit resolution of the pre-recorded sounds (the more bits, the more true to life the sound will be), and the size of the speaker and space in the locomotive. Sound used to be limited to the larger HO steam locomotives and the bigger scales; now there are an increasing number of N scale locos that are coming from the factory pre-equipped with sound decoders and speakers.

What DCC sounds are available?

Sound isn’t just limited to bells and whistles, either. These days, air brakes, radio dispatch calls, steam blow-down, chuff, and diesel engine sounds are all on the menu, and as if that weren’t enough, many sound decoders are capable of being dynamically loaded by computer with additional or new sound programs.

Sound decoders must be considered when you size your power booster system. A typical sound decoder can add as much as an additional half amp to the load your locomotive will draw. Where your system might operate a half dozen locomotives equipped with non-sound decoders at the same time, adding sound might limit your simultaneous operation to three or four.

Is it hard to add sound to a DCC equipped loco?

Adding sound to an existing DCC equipped locomotive can be a challenge. Space is at a premium in most locomotive bodies, and you not only have to find a place to stash the decoder itself, you need to find a space for the speaker. This has led to the development of decoders that are multi-function with sound AND operating functions combined in the same decoder. This is the more expensive way to go, but might be the only route to add sound to that small switcher that shunts cars around your yard.

Cost is also a consideration. Typical sound decoders hover in the $40 to $140 US range, with the higher priced decoders typically offering higher sound quality and the ability to upload different sound files should you decide to move your decoder to a different loco, or merely add more and different sounds. Some of the more popular decoders are manufactured by Digitrax, Soundtraxx, and LokSound and OSI.

All of our discussion so far has been about mobile decoders and their capabilities and use. Decoders have also jumped off the train and onto the layout, so to speak, in order to remotely control nearly any device or effect. This decoders are called accessory or stationary decoders.

What are Stationary DCC decoders used for?

The primary use of stationary decoders today is to control turnout machines. There are two general types of turnout machines available today, solenoid driven such as Atlas Snap Switches and motor driven such as Tortoise. Within each type there are single and twin coil solenoid drivers and either a stall motor or voltage cutoff motor type. Which you chose and use depends on your choice of turnout and vendor.

Decoders of all types are programmable devices and stationary decoders are no different. Recently, their programming has become sophisticated enough to sense a turnout condition and train approach such that it is not possible for a locomotive to enter an improperly aligned turnout and derail or cause a short circuit. They will automatically line the turnout properly and allow the train to pass without difficulty.

What about DCC operation?

One of the biggest advantages of equipping a layout, especially a large one, is the ability for the engineer to control the turnouts from a handheld throttle as he follows the train around the layout. This makes for convenient operation if operating alone, or in an environment where the train would need to be stopped and the turnout thrown manually.

When computer control is added, such as through JMRI, automatic route setup and sequencing becomes a matter of a few minutes of programming a train movement and clicking to activate it. The complicated wiring of a large dispatcher’s panel from years ago can be eliminated in favor of a computer graphic representation of icons and maps, with train location and status updates displayed instantly.

Stationary decoders can be either powered from the track or via a separated DCC command and power bus. For layouts with only a few turnouts, powering from the track is a convenient method, although you must be aware of how the switch machine operates. For example, a stall motor switch machine decoder will require constant power, which needs to be considered in the overall sizing of the DCC system. A solenoid decoder will require a short burst of high current to operate the turnout, then be idle until the next time the turnout is moved.

How much do decoders cost?

Stationary decoders are generally found in about the same pricing space as mobile decoders. The cheapest single turnout decoders start at about $15 US and go up to $50 or so. Decoders are available that will operate multiple turnouts from a single decoder. Although these tend to be on the higher end of the scale, the multiple turnout addressing capability makes them very cost-effective in the long run.

The radio control modeling community has used small inexpensive servos for years to control flight surfaces and steering of vehicles. Recently, some stationary DCC decoders have become available configured especially to drive RC servos. At about 1/3 to ¼ of the cost of the typical stall motor switch machine, this is an attractive option as well. The major drawback of servo controlled turnouts is that servos are not designed to operate continuously in a stalled condition. Turnout machines such as the Tortoise hold the switch points in place with motor torque, but a servo motor needs to have power removed to prevent damage once the desired position is achieved.

Although stationary decoders are mostly used for controlling turnouts, Traintek has an interesting device called and Aux-box which is essentially a DCC-controlled electronic switch. It has up to 12 switched circuits that can be combined in groups if desired to offer SPST, SPDT, DPDT, or other more sophisticated current switching functions for control of other layout items. These can be features such as operating lift or draw bridges, turntables, sawmills and pumps. In short, anything that can be turned on and off with a switch or a relay can be controlled with the Aux-Box. Such capability is a bit pricey; the list price for that Aux-box is about $160 US.